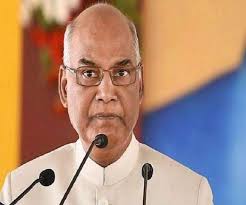 President Kovind in address to Parliament

Jan 31: President Ram Nath Kovind, in his opening address at the budget session pr Parliament, said that the present government has laid a strong foundation for ensuring that this century belongs to India.

Addressing both Houses of Parliament, President Kovind said, “This is a very important decade for India, as we will complete 75 years of Independence. The steps taken by my government has laid a strong foundation for to ensure that this decade, and the century, belongs to India.”

He also commended the people of the country for behaving maturely in the wake of the historic Ayodhya verdict given by Supreme court last year. “The trust our people repose in our democratic processes, makes our democratic foundation strong. The level of maturity our people showed after the Ayodhya verdict is commendable. My government belives that dialogue and debate makes a democracy stronger. Any kind of violence weakens the country and our society,” President Kovind said.“The corrective steps taken by government in the last five years on the ground has resulted in substantial improvement in India’s global ranking,” he further said in his addess.

Terming the abrogation of Article 370 and 35A as “historic”, the President said that it resulted in develoment of Jammu and Kashmir and Ladakh.